Becoming a parent for the first time can sure be nerve-wracking. Moreover, it’s a feeling that only first-time parents can understand. Becoming responsible for another tiny, super fragile human being and caring for it is not something that you get taught at school. And even if you did, there’s no guarantee it will be the way you predicted.

Recently, this furry first-time mama melted the hearts of many. The golden retriever named Yami was captured trying to console her whining puppies by bringing them toys.

Yami, a first-time parent, seemed anxious and didn’t know what to do when her three newborn puppies began whining. While trying to console her babies, the golden retriever was captured walking around the living room only to bring stuffed toys to her three puppies. 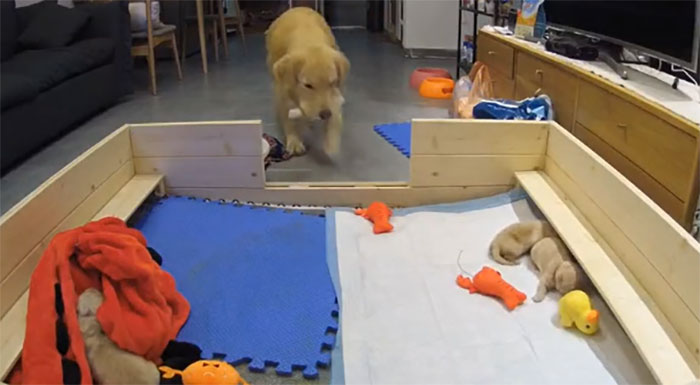 The adorable moment was captured on a security camera in Yami’s home in Zhengzhou, China. The footage shows the golden mama pacing around anxiously as she tried to find a way to console her firstborns. The mother gave birth to her puppies in the beginning of October, according to her owner.

First, Yami brought one of her toys to the bed where her puppies were resting. She nudged the toy with her nose as if trying to console them and stop them from crying. However, the three tiny puppies continued whining, so their mother went out one more time to bring more of the toys.

Talking to the Daily Mail, Yami’s owner told that it took almost three hours before the babies finally relaxed and settled down. Yami sat down next to them and stroked them with her nose. Yami’s owner told the media that she was both surprised and touched upon discovering the footage later that day. 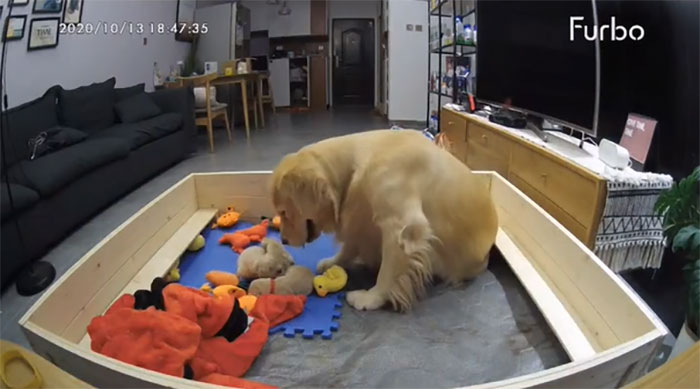 “It was the first time I saw [her] doing this,” Yami’s owner told the media, talking about the adorable moment. “Sometimes she would remain standing [while feeding] to avoid crushing them. I’ve also spotted her fetching warm clothes for [the puppies],” she added.

The video was originally shared on a Chinese version of TikTok—Douyin. It has been viewed thousands of times, and has spread on other social media platforms as well.